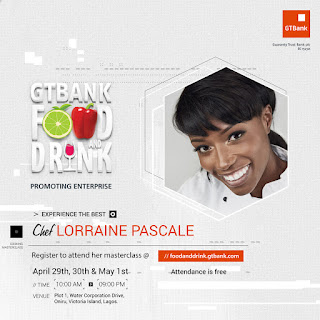 British Chef, bestselling author and TV personality, Lorraine Pascale, will be at the 2018 GTBank Food and Drink Fair to treat guests to an exciting Masterclass on how to make the perfect desserts.

Before she became one of the biggest names in UK food shows, Lorraine was the first Black British fashion model to appear on the cover of American Elle. Being there and done that, she decided to follow her real passion–cookery–and enrolled for Leith’s Diploma of food and wine course.  She later graduated with a first class honours degree in Culinary Arts Management at London’s University of West London.

Lorraine’s mastery of baking has earned her international appeal and accolades. She has been a judge on the UK version of My Kitchen Rules, Food Network’s Holiday Baking Championship in the US and in March 2015, co-hosted one of the UK’s biggest TV programmes, The Nation's Favourite Food. She also runs a successful blog where she shares her recipes for baking as well as tips for those wishing to embark on a journey to a healthy lifestyle.

If you would like to attend Lorraine Pascale’s Masterclass at the 2018 GTBank Food and Drink Fair, which holds on Sunday, April 29th, click here to register….