September 01, 2017
One of Nigeria’s leading logistics company, Red Star Express Plc, has posted a turnover of N7.3billion in the year under review which is ten percent (10%) higher than the preceding year. The profit before tax increased from N572million to N653million, while profit after tax also increased from N334.4million to N426.8million.

This was declared at the recently organized 24th Annual General Meeting (AGM) of the company held in Lagos. At the AGM, Reports and Financial statements of the year ended march 31st 2017 were tabled down while reviewing the company’s performance during the financial year. 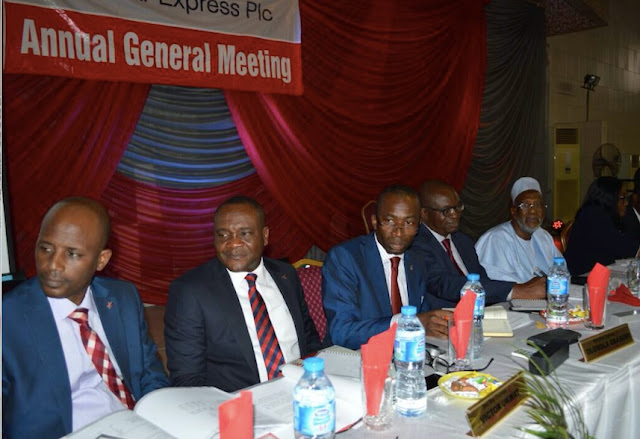 On dividend, the company maintained its commitment to the creation of wealth for shareholders in appreciation of their support at all times. To this end, the Board of directors declared a gross cash dividend of 40 kobo for every 50 kobo share totaling N236million which will be paid on September 7th 2017 subject to the deduction of appropriate withholding tax.

According to the Chairman, Dr. Mohammed .H. Koguna, the company is happy to have posted a profit from its preceding year inspite of challenges. “I am happy to inform you that despite the challenges posed by the environment during the financial year under review, our staff and management worked assiduously to ensure that our company posted a satisfactory result. Lower oil revenues, tight capital controls, increased inflationary pressure and exchange rate volatility combined to make 2016 a challenging year for Nigeria. By June 2016, the country had slipped into recession, facing its first full year contraction for almost three decades, with a negative annual GDP growth rate of -1.73 percent compared to about 2.8 percent growth rate recorded in 2015 as reported by the Nigeria Bureau of Statistics (NBS). Most of the hitherto solid conglomerates had to resort to several cost cutting measures, including the most inevitable of downsizing, in order to remain active in the economy. Despite being a global phenomenon, unemployment has been a major challenge successive administrations contend with yearly. The national Bureau of statistics (NBS) says the country’s unemployment rate rose from 13.3 percent in the 2ndquarter to 13.9 percent in the 3rd quarter of 2016. The crisis in the nation’s aviation industry escalated from occasional crashes to perpetual flight delays and cancellations. The acute shortage of aviation fuel also worsened the situation with airfares rising by as much as 3005. However, we are aware of government’s multi-faceted efforts in confronting and resolving the economic challenges and we can attest to the fact that they are already yielding positive efforts. We are glad our company made profits despite all”.

Red Star Express remained steadfast in her policy of making sure that the social and economic welfare of its stakeholders are preserved and sustained through the Red Star Foundation. However, to show commitment on this, during the year under review, the company awarded 20 additional scholarships to secondary school students from the Eastern, Western and Northern parts of Nigeria.

The company praised the team of the new GMD/CEO, Mr Obabori and the Group Executive Committee comprising of the Executive Directors and Divisional Managing Directors of the subsidiaries who had worked hard in the year under review to create growth platforms and expansions into related opportunity areas. The company is of the opinion that the present management will further improve the fortunes of their company in the coming years. The former GMD/CEO, Mr Sule Bichi who was appointed as a Non-Executive Director with effect from October 27th2016, was also appreciated amongst others.

In the course of the year, the company opened a branch office in the Niger Republic and is gradually building capacity in pick up and delivery of mails and packages.

Nevertheless, the company looks forward to restructuring the company as a Holding Company from its current Group Structure which the company has run for over seven years. This according to her, became necessary in view of the various initiatives the company seeks to explore and the need to have a more structured accounting system.

Red Star Express is a licensee of FedEx (Federal Express), and one of the most reputable companies in the Nigeria logistics industry. Incorporated in October 1992, the company provides a portfolio of logistics solution which includes domestic and international deliveries, freight forwarding, integrated warehousing and haulage services, information and document management, e-Commerce order fulfillment services. Red Star became an Associate of TNT following the acquisition of TNT by FedEx in 2016.