January 23, 2017
In a bid to educate and advocate for dehumanization of lepers in the society, Junior chamber international Nigeria in collaboration with NIPPON Foundation, Japan, is embarking on a thorough sensitization tagged “Think leprosy Now”. The Campaign is a social responsibility initiative geared at creating conducive environment for leapers and educating all stakeholders to play an important role.

“The think Leprosy now” is a global appeal which came out of the need for change designed to restore hope and dignity to people living with leprosy and how they should be perceived. The campaign will take the organisation on a work to the major leprosy colony in Lagos, Abeokuta, Ogbomoso, Enugu and Abuja

Commenting at the programme kick off , the immediate National President, JCI Nigeria, JCI Ambassador Olatunji Oyeyemi said " a lot of Nigerians do not know that leprosy is a curable disease and this has resulted in unnecessary stigmatisation of victims.

He also reiterated that if the public understands the disease better, people affected with leprosy will feel freer to seek treatment at most general hospitals where treatment is free instead of isolating them. "Let’s give them an opportunity to contribute to the development of the society and also to live like every one of us by working together to support them, also having an all inclusive mindset to ensuring and creating awareness and sensitization nation wide” he added

Leprosy is primarily a granulomatous disease of the peripheral nerves and mucosa of the upper respiratory tract; skin lesions (light or dark patches) are the primary external sign. If untreated, leprosy can progress and cause permanent damage to the skin, nerves, limbs, and eyes. Contrary to folklore, leprosy does not cause body parts to fall off, although they can become numb or diseased as a result of secondary infections; these occur as a result of the body's defenses being compromised by the primary disease  Secondary infections, in turn, can result in tissue loss, causing fingers and toes to become shortened and deformed, as cartilage is absorbed into the body

However, leprosy is actually not that contagious. You can catch it only if you come into close and repeated contact with nose and mouth droplets from someone with untreated leprosy. Children are more likely to get leprosy than adults.
It usually takes about 3 to 5 years for symptoms to appear after coming into contact with the leprosy-causing bacteria. Some people do not develop symptoms until 20 years later. The time between contact with the bacteria and the appearance of symptoms is called the incubation period. Leprosy's long incubation period makes it very difficult for doctors to determine when and where a person with leprosy got infected.

Today, about 180,000 people worldwide are infected with leprosy, according to the World Health Organization, most of them in Africa and Asia. About 100 people are diagnosed with leprosy in the U.S. every year, mostly in the South, California, Hawaii, and some U.S. territories. 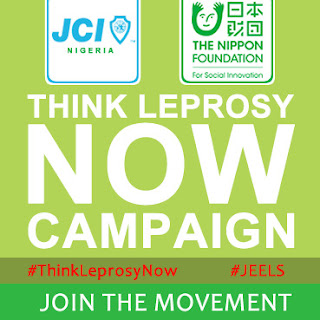 To be part of this life saving campaign, join us on our various social media platforms : #ThinkLeprosyNow, #JELLS, @thinkleprosynow www.facebook.com/thinkleprosynow, on Instagram and twitter.

JCI is a nonprofit organization of young active citizens age 18 to 40 who are engaged and committed to creating impact in their communities. Active citizens are individuals invested in the future of our world. JCI gathers active citizens from all sectors of society. We develop the skills, knowledge and understanding to make informed decisions and take action. As globally minded young people, we all have rights, responsibilities and share goals. We find targeted solutions to local issues benefitting our communities, our world and our future. Embracing new ideas, collaboration and diversity, we have the passion and courage to address the critical challenges of our time

JCI NIGERIA
Junior Chamber International Nigeria -- a worldwide federation of young and active citizen. Mission to provide development opportunities that empower young people to create positive change’ and Vision to be the leading global network of young active citizens’. Established in 1957, are Young Active Citizens taking action and creating impact in 36 states of the federation.