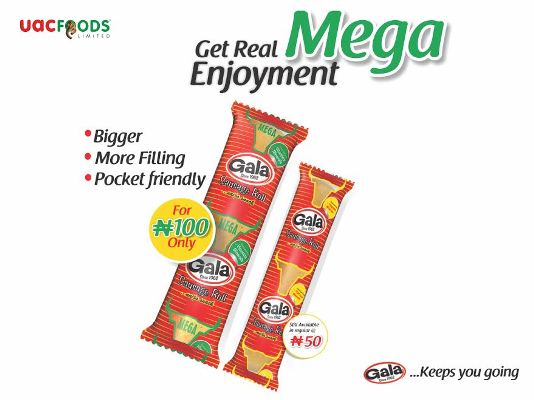 Gala is the undisputed leader in the sausage roll market in Nigeria. But over the years, following the influx of other brands in the category, the brand’s market position has come under sustained threat.
But in recent times, through the deployment of strategic marketing mix approaches, the gala has been able to reassert its leadership and take back control of the market. Now, Gala, in a bid to further reinforce its leadership in the segment has launched a bigger version of the product which now sells for N100.
The new gala is christened Gala Mega, as it is a larger sized offering from the brand. And according to UAC Foods, makers of Gala, the product is a direct response to the yearnings and desires of consumers for a more filling snack. “Some consumers have been found to eat multiple sausage rolls, just to get filled up. With Gala Mega, consumers can easily fill up on a friendly budget,” General Manager (Marketing)Mrs. Joan Ihekwaba said today at the launch of the product in UAC premises in Lagos.
She has however insisted that the N50 Gala will still be available for consumers until such a time when the exigencies of market forces demands otherwise. “The new SKU is an addition to the existing variant of gala brand which includes the regular gala sausage roll, mini gala, gala chicken, which was launched in August 2014, and gala cocktail,” Ihekwaba said.
Meanwhile, the company has recently rolled out a new set of campaigns to back up the launch and drive consumer awareness for the product. The first phase of the gala mega campaign has been running on Brila FM up until now, and UAC has said that the full rollout will commence in the coming days.
It is not yet clear how consumers will receive the new product, but a section of consumers who spoke with MARKETING EDGE said it was a positive development because it is more filling and even tastier. “With this new gala, you get that feeling that it is more value for your money, and more so, it is more convenient to handle than if you had to buy two at the same time. So I am positive that it will be well received. But that is my view, it is up to the market to decide,” Joseph Fregene said.
Gala Mega, which pioneered the sausage roll market in 1962, is said to be rich in vitamins and minerals is expected to be on sale from tomorrow.
Source:marketingedge