July 25, 2016
On Saturday July 23, 2016, the GTBank Common Wealth Team, made up of players from Pakistan, New Zealand, South Africa and Canada, emerged victorious against the England team to win one of Polo's most iconic trophies. The Commonwealth Team, sponsored by leading African financial institution, Guaranty Trust Bank plc, defeated the England Team 12 – 11 in what was an amazing showpiece of fast-paced polo filled with pure passion, competitiveness and fair play.

The Royal Salute Coronation Cup is one of the most historic of polo trophies which annually pits the finest international players against the England team in a contest attended by members of the British Royal Family as well as distinguished personalities from the world's Diplomatic, Aristocratic, Business, Arts, Government and Celebrity circles. 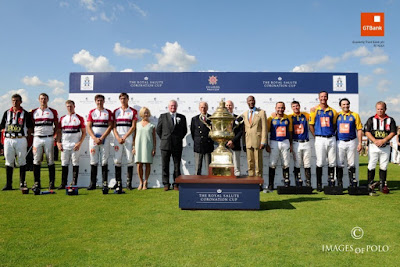 According to Brigadier John Wright, Chairman of the Hurlingham Polo Association, "This year's Royal Salute Coronation Cup showcased international polo at its best. I would like to thank the organizers of this event for creating a world-class platform on which to promote polo to an increasing audience."

Commenting on the Bank’s sponsorship of the Commonwealth Team, Segun Agbaje, the Managing Director and Chief Executive Officer of Guaranty Trust Bank plc, said; “We are proud to sponsor the Commonwealth Team in a tournament that is second to none in the world of Polo and which showcases the noble values of passion, quality and competitiveness – values deeply enshrined in the GTBank culture and which have made the bank a truly African and proudly international financial institution.”

GTBank has consistently played a leading role in Africa’s banking industry. The Bank operates from over 230 branches in Nigeria and has banking subsidiaries in Kenya, Rwanda, Uganda, Cote D’Ivoire, Gambia, Ghana, Liberia, Sierra Leone and the United Kingdom. Regarded for its superior financial performance and best in-class product and service delivery, the bank has received numerous awards from industry watchers and analysts, some of which are the “Best Banking Group of 2016, Nigeria,” by the World Finance Magazine and the 2016 Bank of the Year by Euromoney, a leading authority for the world's banking and financial markets.