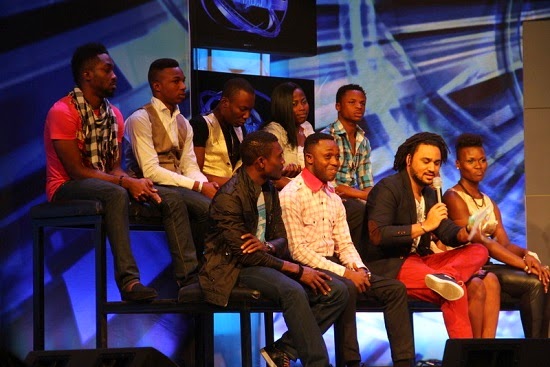 A total of 100 most outstanding contestants have been drawn to participate in the theatre auditions of the on-going season five of the Nigerian Idol TV reality show.
The contestants are pooled from the five auditions centres and are made up of the 28 golden tickets awardees and other talents whose performances the trio celebrity judges on the show adjudged exceptional at the auditions.
A total of 30 contestants from the lot is expected to emerge for the call-back phase of the competition. To arrive at this figure, they will be grouped into sizeable numbers from which individual members will be required to perform different song lines before the celebrity judges. Group members with best individual performances will qualify for the next round of the 3-stage theatre auditions. This process will be repeated until the final 30 emerge.
In the same vein, the Dream Studios, venue of the theatre auditions has become a den bottling up such mixed emotions of hope, disquiet, uncertainties, disappointment and palpable fear of failure among contestants.Some of the contestants who shared their views expressed confidence in their abilities to scale the hurdle the theatre auditions present to their dream of progressing to the production stage.
“I feel happy and privileged because getting to this stage is not easy; it has been a serious task for me. I had concluded that should I get to this stage, I will strive to make it to the top 30,” stated Ogunrombi Olakunle (KPeace), who got a golden ticket to qualify for the top 100.
Another contestant from the Abuja Centre, Kelvin Oluwaseyi Audu admitted the usual signs of nervousness, but was quick to stress his readiness for the challenge.His words, “I hope to give my best in this stage and, though, I am a bit nervous, but hopefully I will scale through.”
Also speaking on expectations from the top 100 contestants, one of the celebrity judges on the show and performing Afro Beat icon, Dede Mabiaku enjoined the contestants to make the most of the opportunity offered at this stage to advance their cause for places among the top 30 expected to emerge from the current number.
“The standard demands quality from all participants. The quality of what they have to offer is the concern here. Anyone whose performance is not up to standard will be shown the exit door, but stays, if it is above par. This stage guarantees progression to the production stage,” he said.
Another judge on the show, Yinka Davies describes the top 100 stage as a “crunch time for the contestants. In her words, “It is crunch time now. At the auditions, we played friendly with them, but that is one thing. The judges are easy and they love the contestants and want the best from them. Playing friendly with them was to help prepare them for the serious day, and now that serious day has come. It is not about survival; it is about not giving up under pressure. Now, their desire to succeed must exceed their ability to perform.”
Meanwhile, the broadcast of the Nigerian Idol season 5 on both terrestrial and satellite stations continues weekend of March 14 and 15 across the country. It promises to offer real time fun and quality entertainment to the millions of viewers and fans of the family-oriented talent-hunt show
Nigerian Idol season 5 are aired on Saturdays and Sundays on the following terrestrial and satellite TV Stations: NTA National (3.30 – 4.30 pm), STV (both DSTV and Terrestrial, 9-10 pm), Superscreen (9 pm)and Smash Tv (8pm on CONSAT). Others stations on Startimes are WAP Tv (9pm), AMC (7pm), Rave Tv (7pm), Cool Tv (9pm), Wazobia Tv (8.30pm), Real Star Tv (8pm), Oodua Tv (7pm) and V. Channels Tv (8pm).The eventual winner goes home with N7.5 million cash reward, a brand new car, a recording deal worth N7.5 million and some high-end devices.
source:marketingworldmag