November 24, 2014
In keeping faith with its promise to reward subscribers, MultiChoice Nigeria, a leading pay-tv content provider for DStv and GOtv, has launched a new promotion tagged:”MultiChoice Super Cruise promo”. With the new promo, intending and existing subscribers can participate by buying or subscribing their way to winning one of 20 Kia Rio cars, 100 Plasma TV screens, or 30 DStv Exploras decoders which are up for grabs.
Addressing the media at the launch of the promotion, General Manager Marketing, MultiChoice Nigeria, Martin Mabutho said MultiChoice is committed to consistently rewarding its loyal customers. 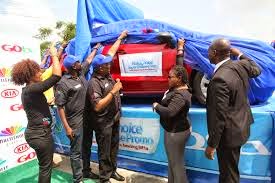 He emphasized that apart from the 20 Kia Rio cars, the company is also giving away 100 Plasma TV screens, or 30 DStv Exploras decoders to DStv and GOtv subscribers.
Anaslysing the process involved, Mabutho explained that to enter for the promotion, all the subscribers need to do is to buy a DStv decoder which comes with a dish, pay three months subscription on either Compact, Family or Access Bouquets.
He remarked: “It’s so simple, once you buy the decoder and pay three months subscription, you automatically qualify for the weekly draw where you could win any of the amazing prizes”.
Existing DStv subscribers can also enter the competition by ensuring they remain connected for three months.
He added: “We are giving our existing subscribers a chance to also cruise away in a Kia Rio, simply by staying connected to DStv.”
Accordingly, a GOtv subscriber who gets to buy GOtv decoder which was formally 5,300 for 2,900 with one month subscription and makes an additional two months subscription with the GO-recharge card, stands a chance to cruise home in one of the 20 Kia Rio cars.
The promotion which runs from now till February will have winners selected from both existing and new subscribers, through a weekly draw to be held throughout the duration of the promotion.
Source:dailyindependentnig