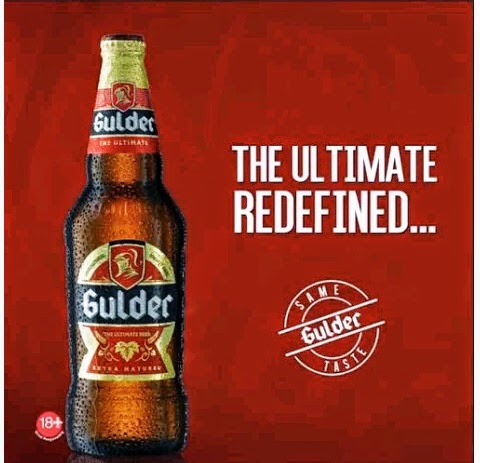 After over four decades of its existence in the Nigerian beer market, one of the premium beer brands from the stables of Nigerian Breweries, Gulder, has unveiled a new branded bottle. The brand new bottle of the beer was unveiled during the launch of the 11th edition of popular TV reality show Gulder Ultimate Search. The event, which held at Eko Hotel and Suites, provided a classy and ultimately star-studded affair with host, Darey Art-Alade. The new Gulder bottle, henceforth, will flaunt a unique label design but with the same great taste which has always represented the brand’s legacy.
The exciting unveiling got to climax as the bottle emerged; thus becoming the first of such innovation in 40 years of Gulder as a brand.
In his address, Managing Director, Nigerian Breweries, Nicholas Vervelde, told the audience that since 1946 when the ship of Nigeria Breweries berthed in Nigeria, and since 1970 when Gulder was launched, is has been a great recipe for the Nigerian consumer market, as the same innovation has translated to other brands on their stable, like legend, Amstel, Fayrus and recently Starlite. “Gulder as a unique recipe is loved and it has not changed. Millions of Nigerians love Gulder and it is enjoyed every day. Gulder has the reputation for innovation. Gulder Ultimate Search is a 100 per cent Nigerian Brewery-sponsored event, created out of innovation” as he seized the occasion, to the consternation of all,  to announce the decision of Council of Elder’s decision to let all the 14 contestants go into the jungle.
The night was finally capped with the naming of Nollywood actor, Chidi Mokeme, as the host of the 2014 Gulder Ultimate Search. Chidi had previously hosted the first two editions of the show in 2004 and 2005 before passing the baton to Nollywood colleague, Bob Manuel Udokwu, but returned in 2012 to continue the reality show. The 11th edition of the 28-day reality show will be held in Aguleri Anambra State between Friday, September 19, 2014 and Thursday, October 16, 2014.
The exclusive event, which attracted entertainment heavyweights like Darey Art-Alade, Gordons and Burna Boy, was also the grounds for the unveiling of a new bottle – the first in over four decades, as well as the revolutionary Gulder Club Ultimate.
All 14 contestants would become instant millionaires at the end of the search, as no contestant will leave the jungle empty-handed. The last person standing will walk away with the grand prize of 10 million and a brand new car.
Source:BrandIQ