Capri-Sonne Gives Away N1m Gifts in ‘Collect the Fun’ promo 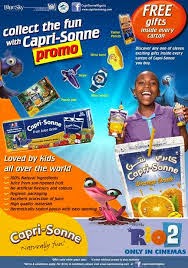 In an effort to reinforce its leadership of the fruit juice market for children, Capri-Sonne, the fruit juice mothers all over the world trust, has launched a consumer promotion tagged ‘Collect the Fun.’ The promo, which will utilise Rio 2 merchandise and gift items in one million cartons of Capri-Sonne, will cover pan-Nigeria.

Rio 2 is a 2014 American 3D computer-animated adventure-comedy film. It is the sequel to the 2011 computer-animated blockbuster movie Rio. The title refers to the Brazilian city of Rio de Janeiro, where the first film was set, and Rio 2 begins, though most of its plot occurs in the Amazon rain forest.

Produced and marketed by Chi Limited in Nigeria, Capri Sonne is a fruit juice that is every child’s delight and trusted by mothers because it contains 100 percent natural ingredients.

Speaking on the promo at the company’s head office in Lagos recently, Deepanjan Roy, managing director of Chi Limited, said the company was excited to tie up with Capri-Sonne Worldwide in the Capri-Sonne Consumer Promo where gifts will be inside 1,000,000 cartons.

According to Roy, every Rio 2 promo carton of Capri-Sonne will contain Rio free gifts including two straws, one wristwatch, one wrist wrap, one colour pencil and one puzzle, as the promo applied to all existing variants of Capri-Sonne.

Capri-Sonne Consumer Promo will leverage the wildly popular Rio 2 film to drive huge sales for the brand, he said, saying also that the turnout at the cinemas for the film, which is being screened in Nigeria, had been impressive.

Capri-Sonne is the number one children’ drink worldwide and controls up to 90 percent of the fruit drink market for children because it contains 100 percent natural ingredients. It is estimated that 5 billion pouches are sold every year in approximately 100 countries around the world.