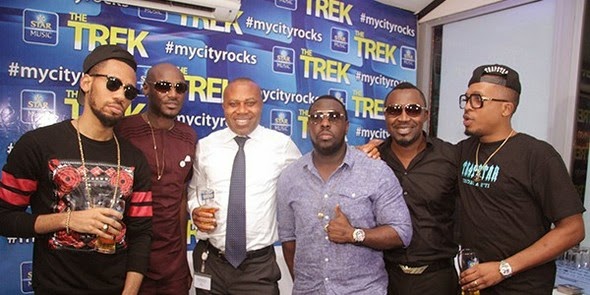 Nigeria’s biggest Pan Nigerian concert organised by leading brewing company, Nigerian Breweries Plc, has rolled out strategic plans to excite consumers as Star Music The Trek is set to tour Nigerian states with popular music artistes. The event held at the prestigious Federal Palace Hotel was fever-pitched, as renowned Nigerian music artistes like Tu Face Idibia, Wizkid, M.I, Davido, Wande Coal, Sound Sultan, Timaya, Mr Raw, Phyno, May D, Olamide, KCee, Sean Tizzle, Naeto C, Dr. Sid, Tiwa Savage, and Alabi Pasuma(making his debut on The Trek)were unveiled to the audience.
Speaking at the unveiling funfare, Corporate Media and Brand PR Manager, Nigerian Breweries Plc.,Edem Vindah, spoke about the rationale behind this year’s theme dubbed My City Rocks. ‘‘We realize that Nigerians are extremely proud of the cities, the uniqueness and all the traits that make these cities special to them; thus, we are giving our fans another opportunity to connect and share on what makes their cities rock. So far, the response has been amazing with all platforms utilised to allow consumers share in the excitement.
For over 12 years, Star Trek has toured several semi-urban areas in the country with Nigeria’s finest music artistes to the delight of millions of fans across the country. Last year, the Trek toured 10 cities namely Abeokuta, Aba, Nnewi, Enugu, Owerri, Lokoja, Victoria Island, Festac, Agege and Asaba. This year, the Star brand will play host to consumers in Ado-Ekiti, Benin, Ekwulobia, Makurdi, Nsukka, OnitshaFegge, Orlu, Umuahia, Uyo and Lagos.
Vindah spoke further on this year’s theme: ‘‘My City Rocks campaign was an exciting pre-campaign on print/electronic and digital platforms preceeding the sign-on press conference. The campaign was driven simultaneously by on-air personalities, celebrities and consumers which gave exciting insights to what individuals considered as the major highlights of their cities.’’
Noticeably missing on this year’s line-up are D’Banj and dynamic duo,P’Square, who featured prominently on last year’s Trek. Interestingly, Mavin Record singing sensation, Tiwa Savage, emerged as the only female artiste billed to perform during Star The Trek gig.