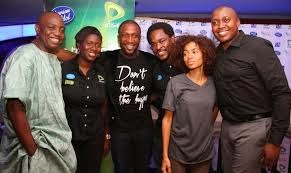 Etisalat, official sponsor of Nigerian idol, has unveiled new judges for the fourth edition of the TV reality music show which is attracting growing interest among Nigerian youth population.
The judges are Dede Mabiaku, Afrobeat singer; Darey Art Alade, soul singer-songwriter, and Nneka Egbuna, Nigerian-German singer-songwriter, while Rhymz remains the presenter of the programme.
Speaking at the unveiling of the judges, Enitan Denloye, strategist brands and marketing director at Etisalat, who believes in the judges for good judgement for the fourth edition, said the brand had the passion for development and empowerment of the youth. The brand’s success really started out in the youth market segment.  When Etisalat entered the market in 2005, the youth market was the fastest-growing market at the time and the most underdeveloped as well, so the team made the choice in targeting the youth market.
Also speaking, Rotimi Pedro, CEO, Optima Media Group, emphasised that the all-star panel reflected the passion and commitment to talent that had strongly resonated in Nigerian Idol in the last three years of its existence.
In his speech, Shakeel Akram, senior marketing manager, PepsiCo International, co-sponsor of Nigerian Idol, said: “The idea of unveiling new set of judges for the show is to continually bring in new twists and turns to make the show more interesting. We believe in the charisma of our new judges and trust that with their wealth of experience in the entertainment scene, the best talent will emerge to add more flavour into the Nigeria music industry.
“The fourth season of Nigeria Idol will be an even more exciting television experience as we have three brand new judges this season. The last three seasons of the show garnered enormous viewership, especially with the youth demography.”Asked what the audience will expect in season four, Darey-Art Alade said: “I’m looking for the things that separate true artistes from others and they are diction, ability to own a song, exceptional and rare talent, and I know I am going to find it on the Nigerian Idol stage.