March 06, 2014
Three schools – Illyad Islamic School, Isheri-Oke, Lagos, Local Authority Primary School, Mowo/Agemowo, Badagry, and Goldspring Foundation School, Oko-Oba, Agege, have emerged first, second and third, respectively, at the maiden edition of BoBo kids with voices, a musical initiative to discover talents among school children in Lagos.
Illyad Islamic School won a brand new school bus, Local Authority Primary School took home musical instruments comprising a keyboard, drum set and amplifier, while Goldspring Foundation was rewarded with a keyboard and drum set for their effort.
The annual music competition, targeted at pupils in schools in Lagos kicked off  October last year, while the grand finale billed to take place December, eventually held last week in Lagos, where the three winning schools won the  mouth-watering prizes.
The theme for 2013 edition was “the Nigeria of my dreams” and participating schools the final 20 feature children from 5-11 years and each school had 5-8 pupils in the choir. 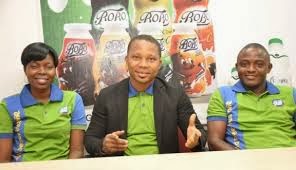 According to Birhiray Ewhubare, market manager, BoBo Food and Beverages, the reason for this theme is the fact that the children are the future of the country and it is important for them to have an attitude of patriotism and a sense of belonging.
Speaking at the grand finale Ewhubare said “after careful study of challenges facing children development especially in the areas of appreciation and expression of the inbuilt talent, our company has designed a talent discovery and reward programme, Bobo kids with Voices a competition for primary school pupils in Lagos.
He said: “BoBo Kids with Voices is an initiative aimed at growing the musical talent of primary school children as well as teaching them the beauty of teamwork. Lagos is the test location for the project and will afterwards be taken to other parts of the country.”
BOBO Kids with Voices is a musical competition where schools enrol their pupils between the ages of 5 and 11 years. Each participating schools had enrolled a minimum of 5 and a maximum of 8 pupils.
According to Ewhubare the schools obtained the entry forms from their local education secretaries and submitted with 200 wraps of the 200ml size of BOBO and a CD/tape of their recorded song.
Ewhubare said the company has always supported government’s effort in promoting extra-curricular activities and the discovery of new talents. “It would be recalled that the maiden edition of our school activation programme in 2010 was won by Pavic International School, while Command School Bonny Camp and Valour Primary School Apapa emerged winners in 2011 and 2012, respectively.
He said Benita International School, Asaba, was also declared winner 2013 Bobo Super Kids and Schools support promo that was carried out in seven states.