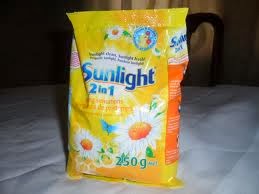 In appreciation of the loyalty of consumers over the years, Sunlight detergent brand from the stable of Unilever Nigeria PLC begins a national consumer engagement imitative with bubble man rewarding consumers across the country.
While the sunlight bubble man will be visiting various neighbourhoods, the sunlight detergent brand is celebrating consumer for years of loyalty in various market and neighbourhood across the country with gifts.
“Aside rewarding consumers, Sunlight detergent has a long lasting fragrance that last longer even after the washing of the cloths. It is great fragrance gives a long lasting fragrance, thus making cloths smell fresh and clean says the brand Building Director David Okeme.
The national activation and consumer engagement initiative of Sunlight detergent which started in November will run through January 2014 in the spirit of the season of celebration, thus the bubble man’s visit to various part of the country will also be supported by a special fun squad called the flash mob that will seek to excite the consumers across the country on the brand’s fragrance.
From Lagos, in the south west, through Abuja in the North and Port Harcourt in the South-South of the country, Sunlight detergent will be thrilling consumers with rewards and fragrance experience. In a recent development, the bubble man was spotted at the cocoa mall in Ibadan with the flash mob crew entertaining the consumers in a prolific dance drama in the mall.
The mall activities elicited commendations from the consumers on ground such as “sunlight detergent has been very good and we appreciate the sudden appearance in the mall.”
A customer who had purchased the sunlight detergent said that she has been using Sunlight for a very long time it has never disappointed her.
The sunlight consumer engagement programme will be reaching out to all consumers across the nation and consumers in the neighbourhoods should be expectant of the bubble man has he will be knocking on doors to reward consumers this season of sharing.
Source: Daily Independent NG